A Review of the reMarkable 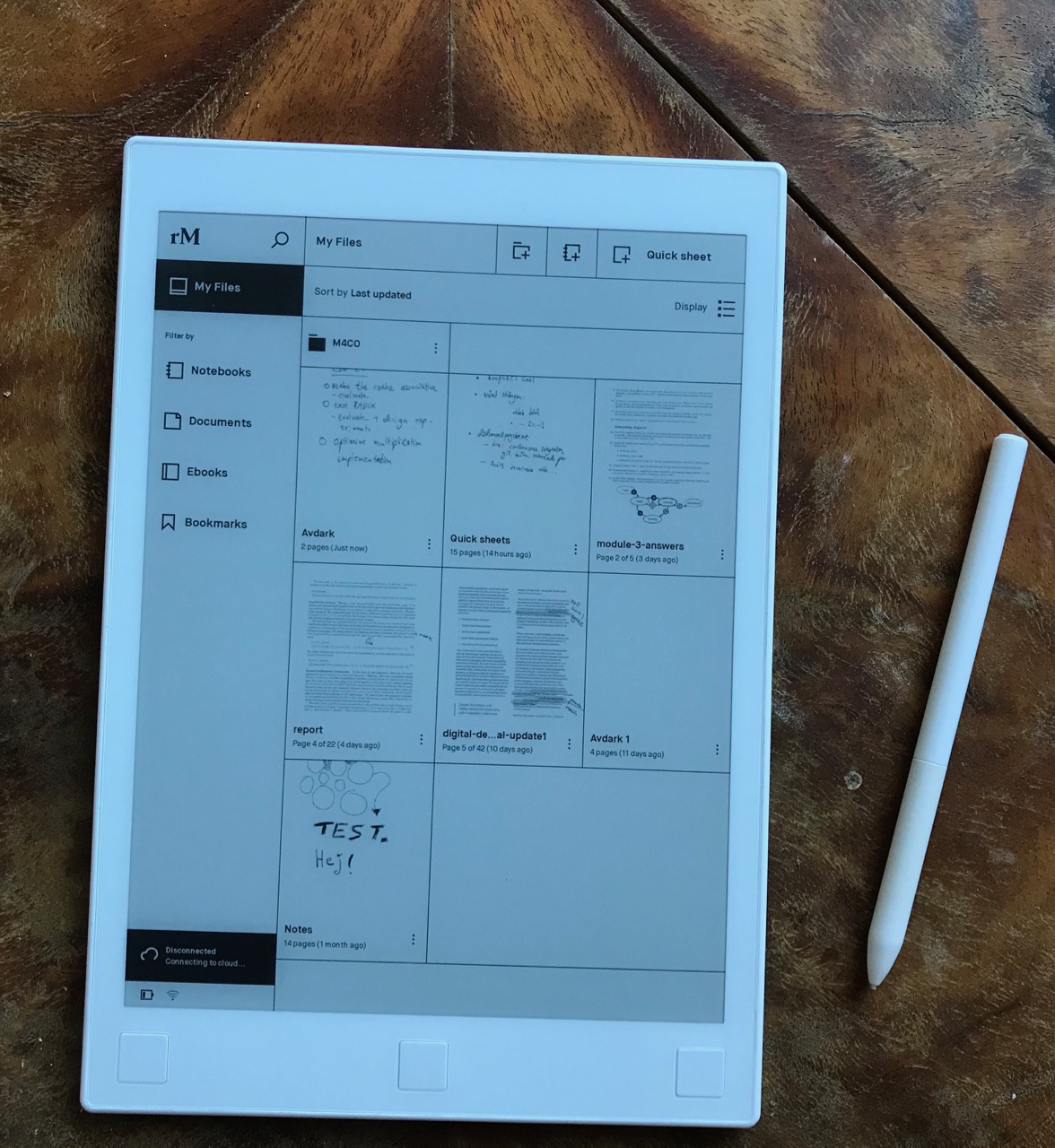 The reMarkable is very much an early adopter technology. It still has some rough edges, though the integration of an electronic pencil on an e-ink screen works remarkably well. Like most young technologies, it's supporting tech, in particular the system software and the supporting apps, are not yet there in terms of design, coherence, and stability. Navigating PDFs for non-sequential reading is arduous, and I found the pencil-imitating brushes to be more annoying than useful. If you really need a tablet to review A4-sized text (approximately) on, and can work around a bit of a hassle, the reMarkable is probably great for you. Otherwise, I'd recommend waiting for more mature---and less pricey---iterations, whether they are from reMarkable or not.

Overall, my impression is that the interface feels slightly half-baked; many things (most notably PDF navigation) is hard to reach, it is not always apparent what the buttons (neither software nor hardware) do, etc. This is perhaps to be expected, and a number of these shortcomings were addressed in a recent software upgrade (that by the way downloaded and installed without hassle for me, showing that at least the upgrade chain works as expected).

I have also had the entire UI freeze multiple times, most notably in cold weather, with forced restarts being the only way of getting back to usability.

The synchronisation apps are awful; perhaps most notably, the way to add a document to a folder is to select the document, click the move button, go into the target directory, and press "move here". It is as if drag and drop was never invented. And worse yet, dragging documents into the app will upload them in the root directory, rather than (as you would expect) in the currently viewed directory.

Frankly, I don't really understand why they had to go with their own app. Preferably, I'd have my reMarkable just connect to a cloud provider (in my case Dropbox, but they should support all of them), and download my files off it. Having a separate client application to synchronise files provide no benefit that I can identify.

Finally, I encountered a weird bug in the PDF export facility of both the macOS app and the reMarkable email export. I had a document where I had previously drawn some illustrations. On both exports, there were erased pencil lines that were not shown on the reMarkable or in the preview app, much like when one scans a paper with pencil traces in a normal scanner. That might be going a bit too far in emulating the paper experience.

My primary intended use-case for the reMarkable was reading and annotating papers and other PDF documents, for which it worked quite nicely; highlighting and making notes in the margin works as you would expect, and it has been able to render every PDF I have given it reasonably. Getting the documents onto the reMarkable is ok (though organising them is, as I have previously stated, a bit of a hassle). The support for exporting annotated PDFs works exactly as you would expect: you get highligter lines where you used the highlighter, and pen-y notes where you used a pen. 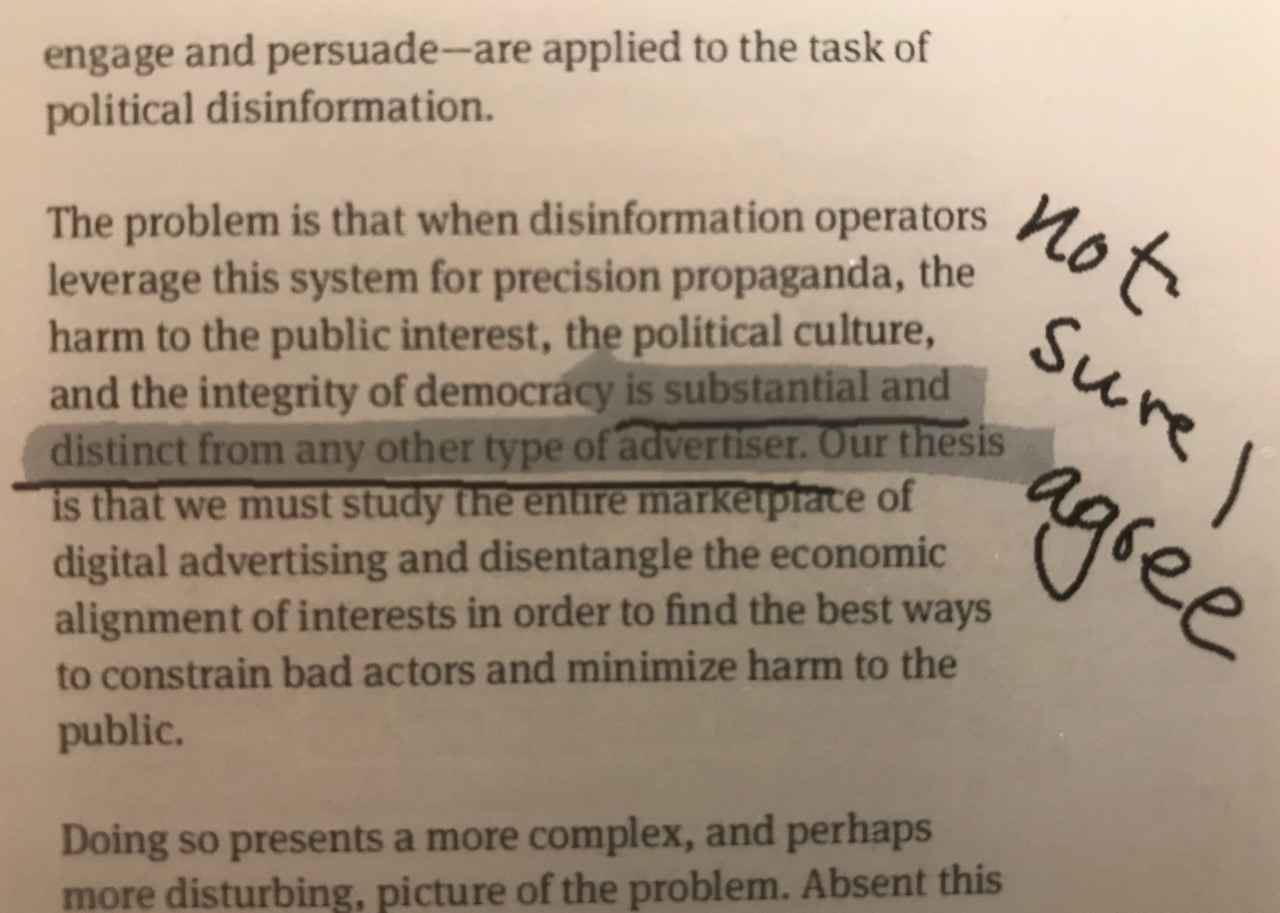 It does read epub books, which is a bit awkward due to the width of the device, but it works as one would expect. Where it really falls short is navigating PDFs, though. Page numbers are offset-from-start page numbers, and not the page numbers you see on the actual pages (as with some PDF readers). No PDF link works, and there is no way to get a table of contents, even if one exists in the metadata. There are basically two options for navigation: tapping on a page in a very spatially inefficient overview of the PDF contents, or entering a page number (that is, an offset from the beginning) manually. This is particularly annoying because the table of content data is there, in machine-readable form, as are the page numbers. And you can't even use the document's own table of contents because you can't (as far as I can tell) click the links on it! 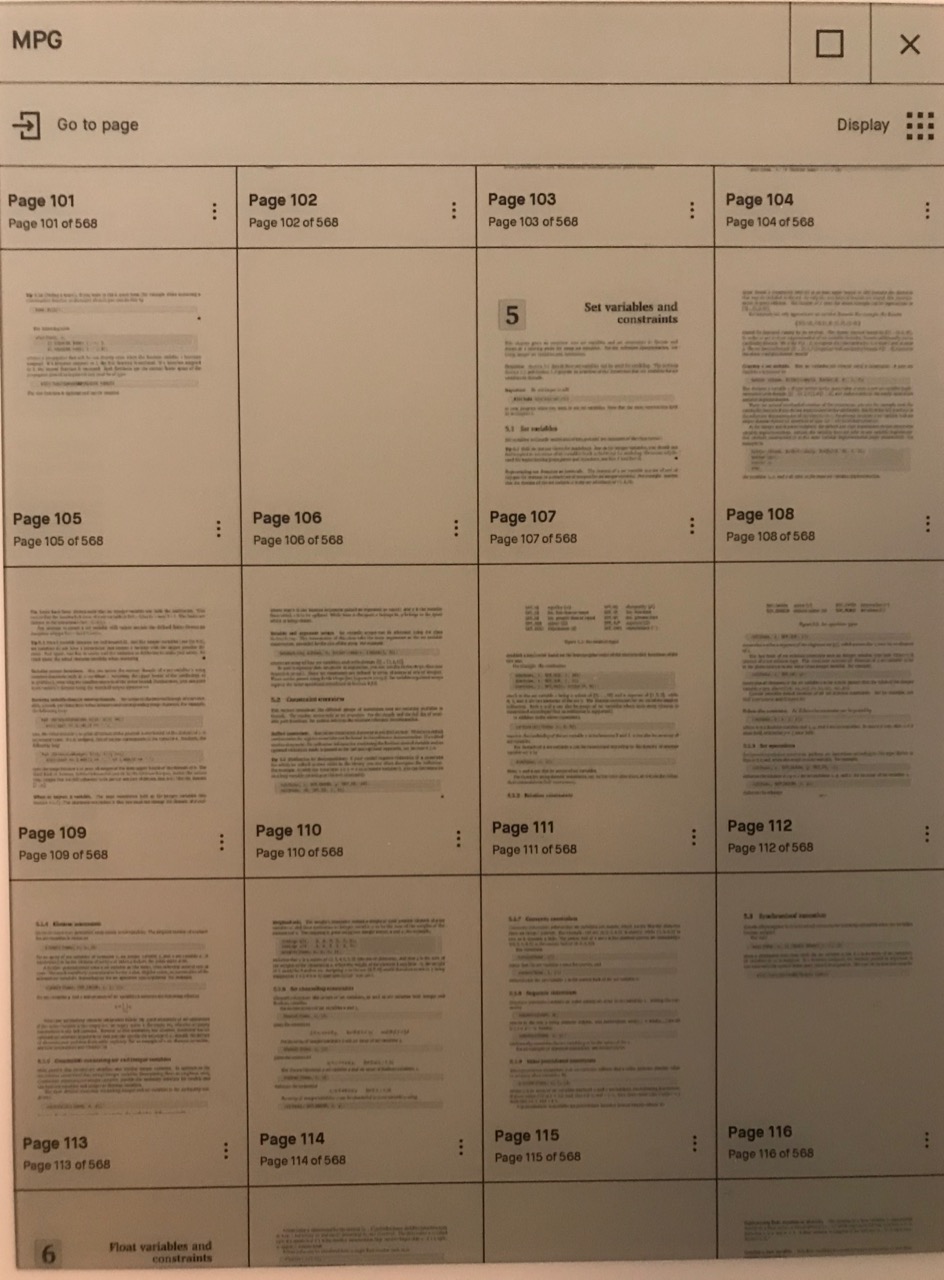 This is entirely a software problem, though, and I'd expect this to be fixed in a future release of the system software. 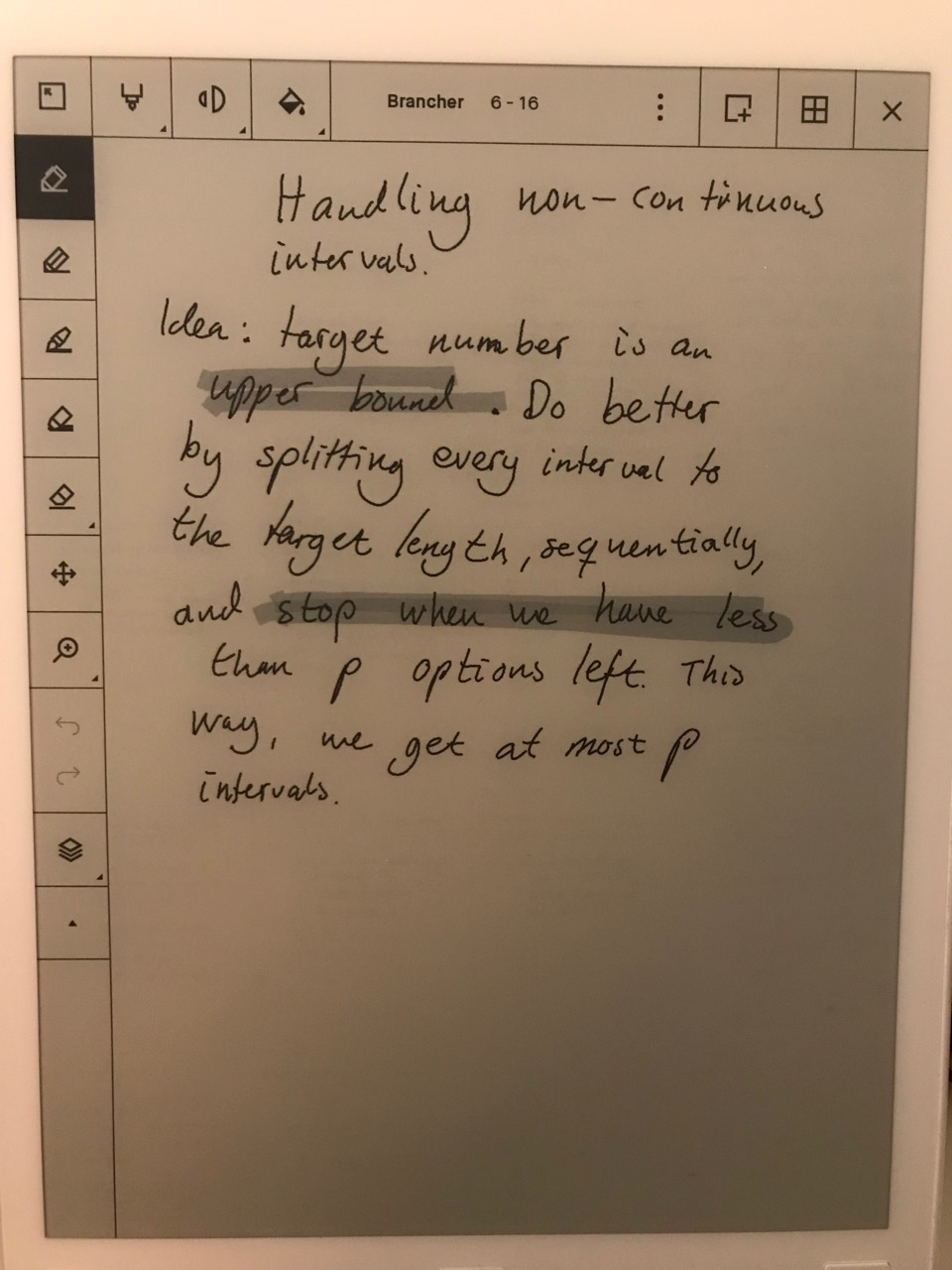 Note-taking works surprisingly smoothly; the pen feels a lot like using a pen on paper, and more pages can be continuously added to a notebook by pressing the right button (as long as the current page is not empty; a nice detail that keeps you from creating unneccessary empty pages). 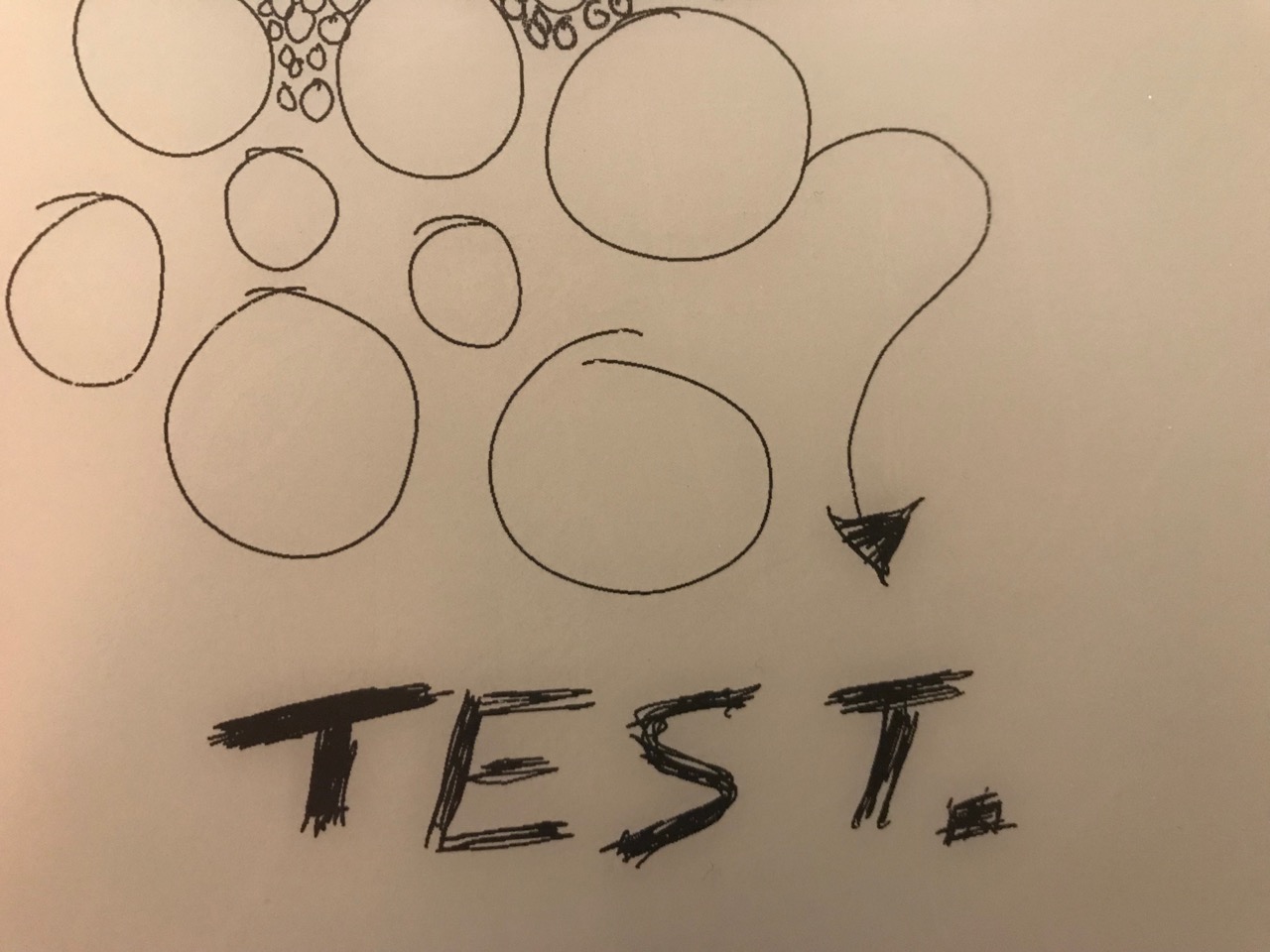 My only complaint is that the eraser is quite unaccessible. A future iteration of the hardware should preferably have an eraser on the back of the pen or similar to facilitate moving between erasing and writing.