Shipping Out&#58; One Month Later 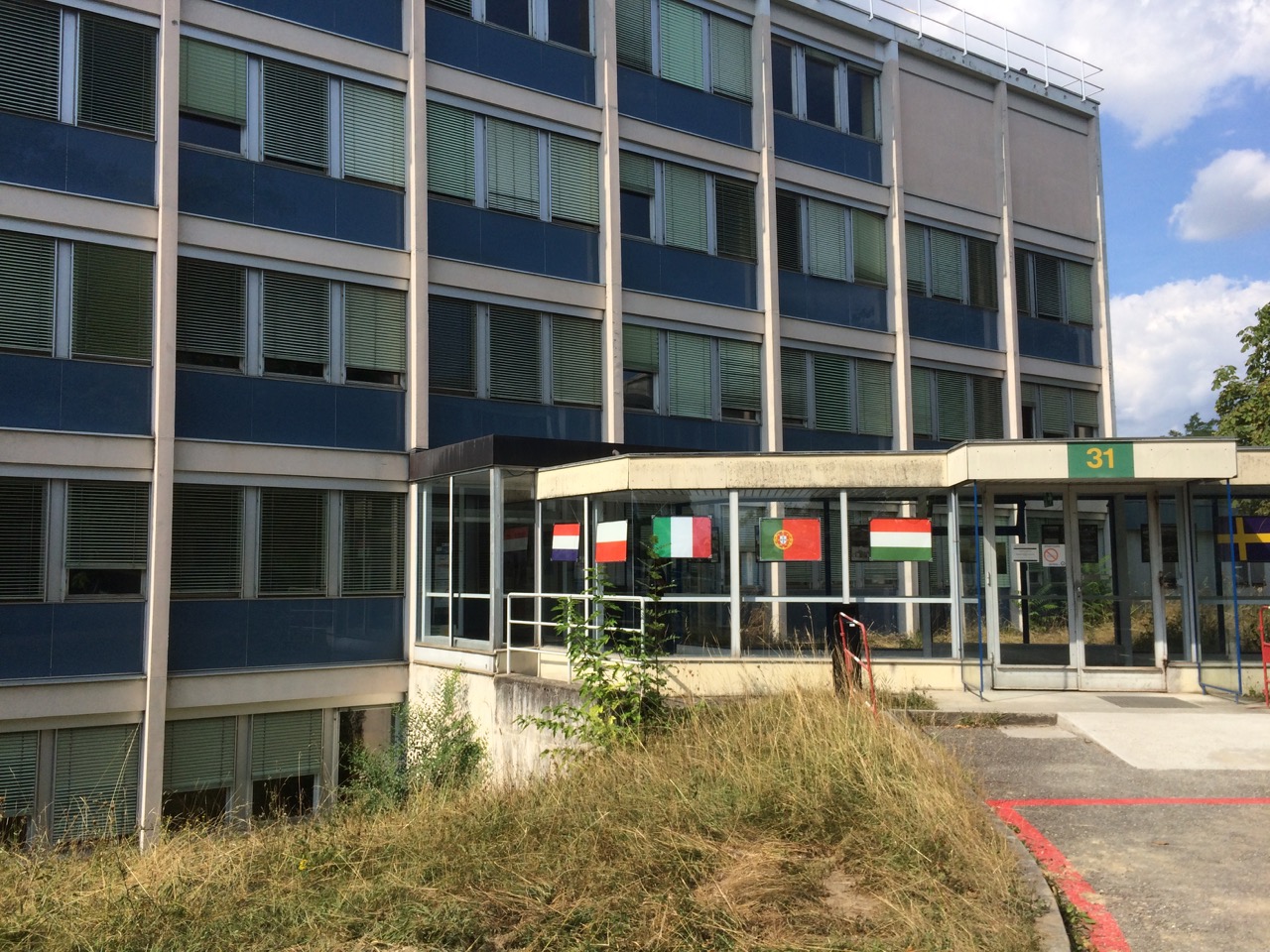 This September, I started a one-year internship at CERN's Database department (more specifically the IT-DB-IMS department, as they are clearly very fond of hierarchies). My assignment is related to logging and storage monitoring, and my primary task will be to provide a solution for automatic propagation and reporting of storage-related errors (think dead hard drives, power failures etc).

Early morning August the 27th, I started my journey. Split between a suitcase and two backpacks, I brought the following with me on the plane:

(*) this turned out to be largely false -- perhaps ten normal days, but not ten really hot days. 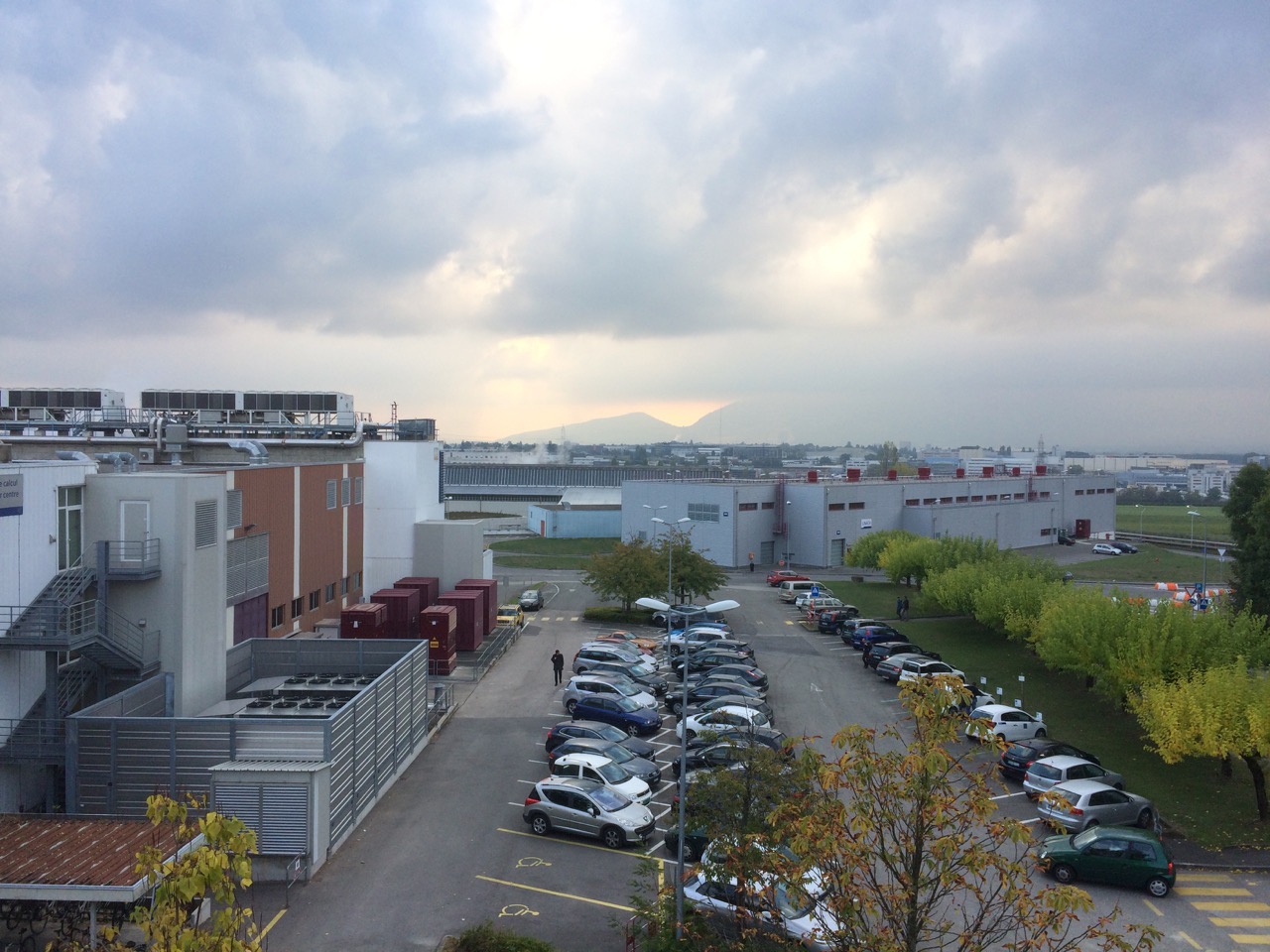 After an uneventful (and very WiFi-less) flight of about two hours, I landed in Geneva, found my luggage after walking an impressive number of hallways, each one plastered with advertisements for luxury watches, various banking services, perfumes etc, and proceeded to board the bus to Ferney-Voltaire, the small French village near the Swiss border where I would be staying.

The process involved much frustration and about one hour of pacing the arrivals hall trying to find someone who could help me buy a ticket from the vending machine. It turned out the Right Thing To Do was to buy a ticket in the machine for a different company than the one who operated the bus I ended up taking. From there, the rest of the trip was mostly uncomplicated, as I had practised walking most of the way from the bus stop to the place I would be staying at on Google Maps in advance. Something which, I suppose, is evidence of the same combination of absolute neuroticism and ruthless pragmatism as vacuum-packing one's stuffed animal for the journey.

During the first month of my stay, I was living without a mobile data plan. The experience reminds me of Cory Doctorow's short story After the Siege (available online as part of Overclocked). Everything works mostly as normal (only worse) -- until I leave the apartment. Then everything immediately stops working. Accidentally closed an email attachment when trying to read the email that contained it? Sorry, it's now unavailable. The song I just added to my playlist? Gone. Too bad the EU hasn't succeeded in outlawing roaming fees yet.

On the Betrayal of Things 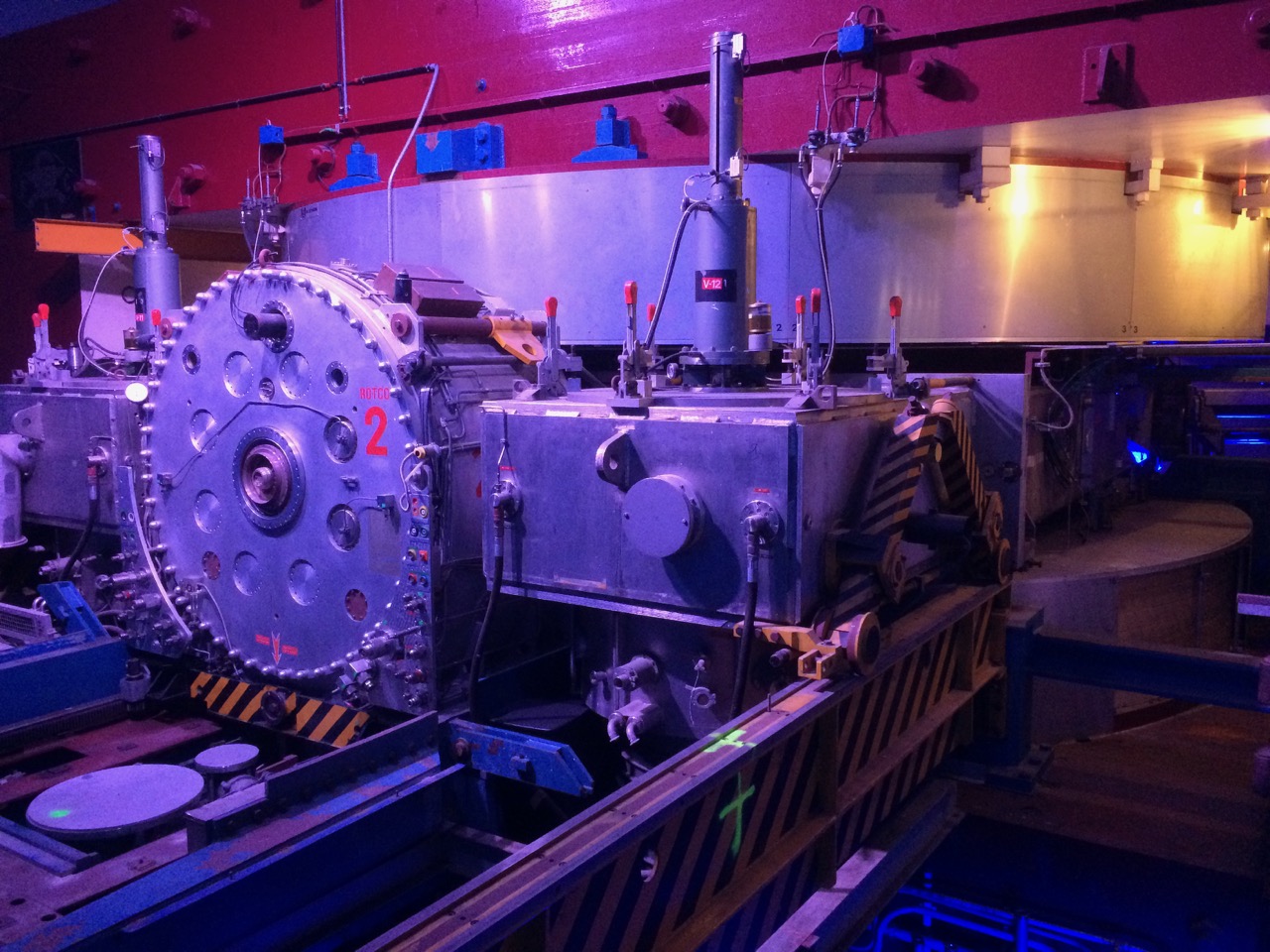 Living in another country for any longer duration is a lot like being at the wrong end of a set of really evil unit tests. In life in general, as in programming, at any given point in time one holds a lot of preconceptions about how the world works -- unreflected habits and assumptions. Living in another country immediately invalidates a non-empty, randomly selected set of these assumptions. It is precisely the experience that Foucault describes in the Preface to Les mots de choses of the "laugh that shatters"; at first one laughs at the three different positions of dried beans in the supermarket, the consistent placement of the potato crisps next to the hard liquor, or the three different, non-consecutive candy aisles -- until one realises that categories such as "baking supplies", "candy", etc are entirely arbitrary, and just took on an air of ontological truths by virtue of being a widely accepted convention. There are, after all, several ways to skin a cat.

The culture shock I experience with the French culture is admittedly a very mild one, but there are definitely subtle but unsettling differences. Milk typically comes high-temperature-pasteurised, which gives it a different flavour than fresh milk. And everything is perfumed and/or tinted pink; toilet paper (!), trash bags -- everything. Loose-leaf tea is not available anywhere, except in gift tin boxes without any option for refills. Muesli is hard to come by, and the "healthy" granola/muesli mixes "without added sugar" contains little chocolate drops. Not to mention the entire pastries-for-breakfast thing. I'm still not over that.

If anything, French administrative culture is a confusing jumble of obstinate strictness and unregulated chaos. Applying for a bank account? Sign 200 papers and prove your residence with a phone or utilities bill, which is apparently the standard way of doing it. Going for a swim? Well, certain types of swimming trunks are forbidden but there is no standardised vocabulary for describing swimming trunks so you just have to figure out which ones are ok through trial and error. But at least they gave me the rebate for residents after I dutifully showed my phone bill at the reception (the de facto standard proof of residence). I may also have slammed my swimwear at the desk and asked "CECI SONT INTERDITS?!". Lucky me, they weren't. 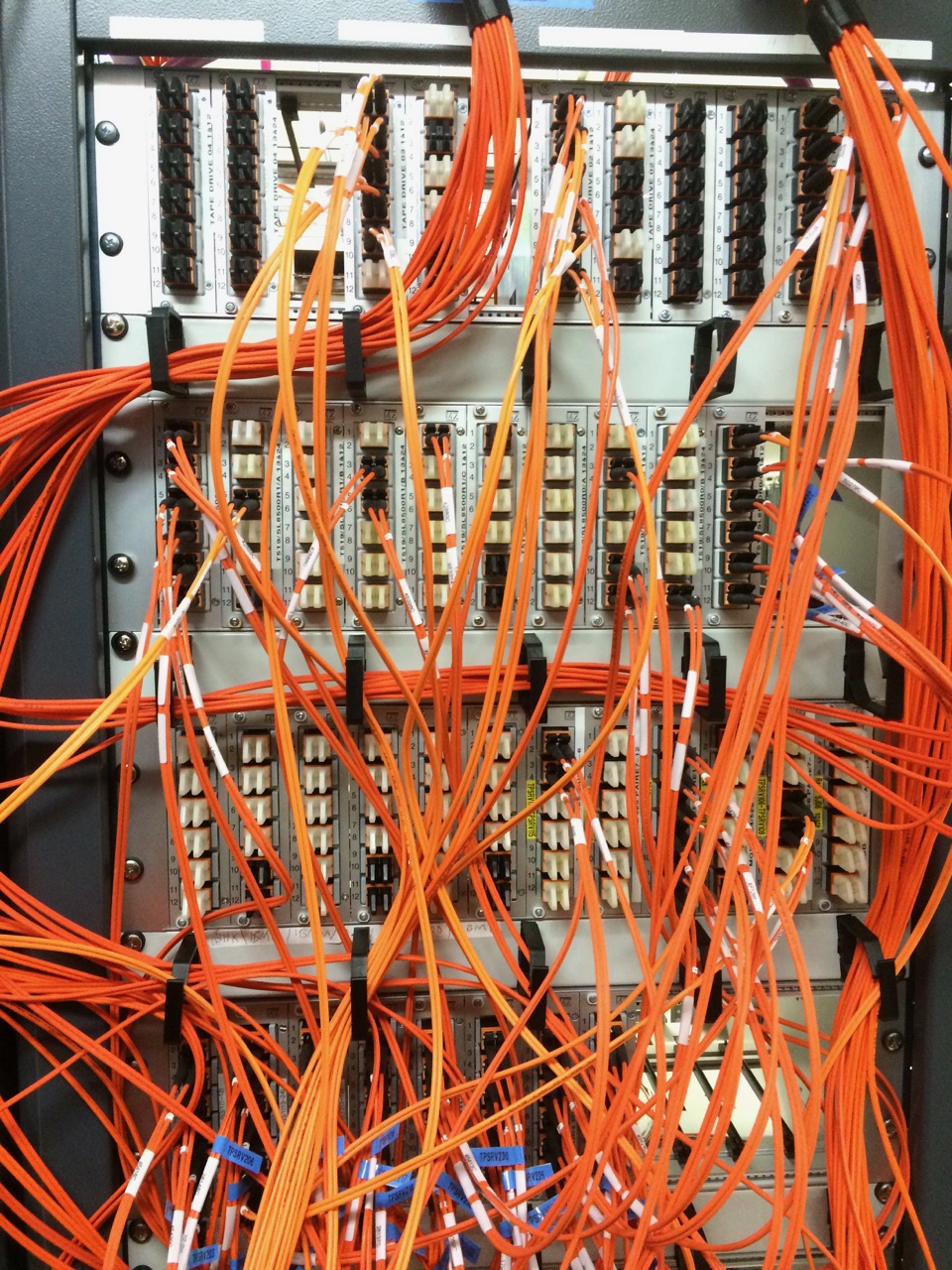 I have never seen anyone suffer so badly from NIH syndrome as CERN does. For almost every given task, they have their own, subtly different solution from the industry standard; Mattermost in stead of Slack, Terrible Exchange Web Mail That Probably Escaped From 2007 in stead of Google Apps (the only instance where I wish they'd have had more NIH and just gone with their own solution), self-hosted GitLab in stead of Github, and a customized variant of Dropbox called "CERNBox". Oh, and they have their own GNU/Linux distros. Two of them. And they are both RPM-based.

From an economical standpoint this makes sense. They are already running operations on huge server farms. Adding a few extra services is probably very cheap, both in terms of labour and other resources, especially compared to paying for a service offered by someone else. And in the long run, their involvement in several FLOSS replacements for common industry applications is most likely greatly improving them. I just wish they would have put more effort into the UX on some of these apps, so that they didn't all suffer from flakiness and the general "a cheaper copy of X" look and feel (well-known from Libre/OpenOffice, which somehow manages to look even worse than their proprietary counterparts -- all things considered no small feat). Frankly, I like my FLOSS implementations as I like my tech products in general -- either better or at least as good as the things they are replacing, or nonexistent.

Other than that, the work is interesting, if a bit mundane. I learn a lot every day, but it is really hard to muster any real enthusiasm for a small python daemon with the task of basically carting data from one API to another. The only real challenges I have found so far is to implement a query language and to test things really, really well, about which I might go into some detail in the future.